Have a stroll around Domessargues

FR - We had left the memory of Louis Perrier (1835/1912), whose name is inextricably linked to the famous French brand of sparkling mineral water, at Euzet-les-Bains. 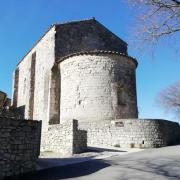 Located less than 30 kms from Uzès, shortly after the villages of Brignon and Nozières, Domessargues unfolds its narrow streets after the Mas Perrier, which you can see when arriving in the village.

Have a look : at the entrance to the village, there is a stone frog placed on a base decorated with a black and red coat of arms (the same coat of arms that can also be seen shortly after, above a helmet by a door)... Both are the echo of the association La guilde de la grenouille...

A peaceful village, Domessargues has a charming rural heritage, in particular the church of Saint-Etienne (11th century).

Saint-Etienne has been listed as a Historic Monument since 1971. Composed of a single nave and a splendid apse, it is best viewed from the rue de la chapelle.

Note: French writer Jean Carrière, author of Retour à Uzès in 1967 and winner of the Prix Goncourt for his novel L'épervier de Maheux in 1972, lived in Domessargues for several years.

History of the coat of arms of Domessargues

"Azure, a castle of three towers argent, an open door, under the archway, there is a lion rampant or".

More information : The Perrier spring is located in Vergèze, 23 kms from Nîmes and just under 40 kms from Domessargues.