Epices & Bon, a journey to the heart of flavours

FR - Spices, secret and fragrant blends, salts of all origins, all these and so many other aromas and "bouquets" await you in a new shop in Uzès.

Epices & Bon is the promise of a journey to the heart of scents, following in the footsteps of the trading posts of India (Chandernagor, Pondicherry...) but also towards Indonesia, China, Mexico...

Whether ground or mixed, spices cover the shelves of this Uzetian trading post. However, there are the more traditional peppers and salts but... are they really so ordinary and classical? Mixed with all kinds of herbs, follow in the footsteps of explorers and test your palate... 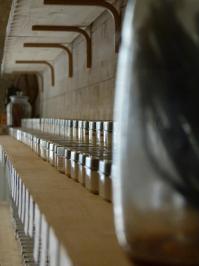 An overview of the ground spices you can taste there: The sweet and spicy Korean gochugaru pepper, the Chinese galanga, from the ginger family, which gives off beautiful citrus notes, ideal for lovers of "Asian and Thai cuisine", the surprising tomato powder, or the tropical Venezuelan or Brazilian tonka bean, which "comes from a tree whose hard wood is known as teak... and its active ingredient, coumarin, has tonic, calming and antispasmodic properties...".

Among the other spices?

Let's introduce black sesame, "a variety apart, a sort of cousin of the classic sesame, but with a more intense, more pronounced taste and considered a natural analgesic. It is a natural anti-inflammatory which very effectively fights neuralgia and cholesterol.

There is also the "angel hair" pepper, which originates from China, near the shores of the Yellow Sea on the outskirts of Beijing, and whose 'fine, tapered shape is unparalleled in the world of peppers and gives it its name'. Another surprising chilli with a fruity spiciness is the "yellow Amazonian chilli", from the fertile Amazon basin of Colombia, one of the largest natural reserves on earth, and one of the regions of origin of the hot chilli family".

Blends as a gateway to culinary fantasy

Taste this fleur de sel with 5 Creole flavours, successfully combining 'fleur de sel from Ifaty (Madagascar), one of the best fleur de sel in the world, with a blend of 5 spices widely used in Creole cooking on all the islands", dukkah, "a very popular blend. This one comes from Egypt where it is literally part of everyday life. And do you know vadouvan, a spice blend that originated in India a very long time ago...

Are you more into peppers and salts? The journey continues with the seaweed salt flower, the roasted spice salt diamond, the Cyprus salt flakes with saffron.

"Don't judge a peppercorn by its small size, taste it and you will feel how it stings" (Arabic proverb)

Unless you opt for verbena berries or the exquisite Persian blue salt, or even the Sarawak black pepper, "a rare pepper, considered one of the best peppers in the world along with its acolytes Kampot pepper and bird pepper (Penja)", which will take you on a journey in the footsteps of the first white raja of Sarawak, Sir James Brooke, a British adventurer born in 1803 in Benares, India (and where, for the record, "undertook to reform the administration of the territory and enacted laws and fought against piracy... ")**. 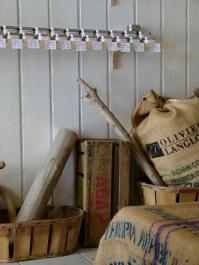 Mango powder, jasmine or marigold flowers, combava leaves for your Thai curries, the African-born hibiscus flower for your very own personal cocktails or the herbs of Provence... Epices & Bon is your guarantee to make sparks fly in the kitchen and to launch yourself into the most international of dishes.

Did you know that, "in 812, Charlemagne called spices and herbs the doctor's friends.

He gave a list of 74 good herbs that were to be grown in the imperial gardens"...***

Follow the advice of the master of this Uzès shop, a true treasure chest, and become an adventurer of taste by choosing to make the most of exotic flavours, with a thousand promises.

Meeting with Silvère Vivien, in charge of Epices & Bon

Hello, delighted to welcome you to the Terroir section of UzEssentiel.

Chef of La Petite Gare in Vers for many years, you swapped your apron to become a counter manager at the beginning of May. How did you come up with this idea?

After 35 years in the restaurant business, including 6 years at the head of my own restaurant at La petite gare in Vers Pont-du-Gard, I decided to devote myself to another of my passions, spices.

First of all, I started to tickle my customers' taste buds by creating my website in October 2021, before finally opening my shop on May 3rd.

Have you always been a spice lover?

My numerous stays abroad for more than 10 years have allowed me to collaborate with catering professionals in England, Belgium, Switzerland and Greece.

Starting with service, I quickly evolved towards cooking and acquired a certain knowledge of spices and aromatics from around the world.

Back in France, I opened my first restaurant in 2006, in Avignon. There I crossed paths with another spice enthusiast who introduced me to the incredible world of condiments, always in search of new tastes and flavours. 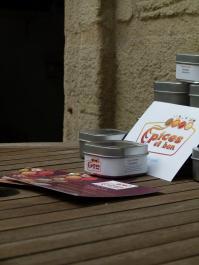 This enriching training in parallel with my work as a restaurateur pushed me to perfect my knowledge, the basis of Epices & Bon.

Today, I have the pleasure of sharing some 170 references in my Uzétian "trading post", and I never cease to run around the world virtually to "flush out" the flavours that I do not yet know.

On my Epices & Bon website, I present each of these spices, their origins and history, and give advice on how to use them to best advantage in cooking. Foodies beware, spices and herbs bring such richness to your dishes and can become addictive!

Who are your commercial partners?

At the moment, I work with two importers, one in Brittany and the other in the Lyon region. Each has its own specificity and they complement each other perfectly.

Their selection includes the great classics, but also more original blends, little known to the general public, not to mention the discoveries to come...

How do you present them?

I chose two sizes of metal containers, somewhat a recollection of the old grocery shops, and bringing a little vintage touch. Very practical for conservation and storage, I offer my customers the possibility of reusing these tins too, filling them in the shop. Good to know too, the QR Codes I put on each containers. You just have to scan it to reach the exact page of my website.

Between spices, peppers and salts, do you have any recipes of your own to show them off?

In fact, in my drawers as we commonly say, I have the project of a book of recipes. This will give me the opportunity to combine my two passions, gastronomy and spices.

Do you have a favourite spice?

My current favourites? I would have to say Batak berries, which are commonly known as a false pepper. These very fragrant berries come straight from Indonesia and are also called Andaliman pepper, Intir-intir or lemon pepper. Growing only wild in Sumatra, Batak berries release powerful citrus notes reminiscent of pink grapefruit, crushed tangerine leaves and have a soft, almost sweet texture. These berries are perfect for spicing up a dark and white chocolate mousse, a piece of braised milk-fed veal with a simple jus, on marinated salmon or with a good fresh goat cheese.

There is also the Chipotle pepper, also known as the jalapeño pepper, grown in Mexico in the state of Chihuahua. Its name comes from the Nahuati 'Chilpoctli', a macro-language of the Uto-Aztecan family, 'Chil' meaning chilli and 'poctli' smoked (with pecan wood). Stronger than the Espelette pepper and less hot than the bird pepper. It is perfect for grilled red meat, white fish, poultry in sauce or any chocolate dessert, among others.

The last of my favourites? Without hesitation, the crazy salt (sel fou) ! It is a flavoured salt that has become kind of a classic on the Ile de Ré and the Guérande peninsula. Very easy to use, it is a must-have in your kitchen's cupboards. Sometimes called the Devil's salt, it is a mixture of Guérande salt, Ile de Ré salt, garlic, chives, crushed chilli pepper, fenugreek****, thyme, cumin, pepper and cardamom. It goes well with your barbecues, your roast chicken, your prawns and shrimps... But, to be honest, you can sprinkle it almost everywhere ! 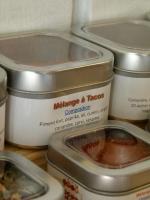 What will be the next spice or herb on your counter?

I recently took my customers to South India with Ajwain seeds, a member of the green anise family, caraway, fennel, cumin and dill. Cultivated from Pakistan to Egypt, this Indian thyme (in reference to the thyme-like flavour it gives off when crushed) has a powerful fragrance which has earned it the name Ugragandha in Sanskrit, which means aggressive.

In some recipes, the Ajwain seed can also be found under the English names ajowan caraway, bishop's weed or carom. A spice widely used in traditional Ayurvedic medicine, it is believed to have virtues against gastric disorders.

Simply chewed or consumed as a tea, the Egyptians also enjoy it after a hearty meal. In Egyptian and Iranian cuisine, the seeds are used to flavour rice or peas, while Indians use them in their bread doughs and other pastries.

We like: The Scoville's scale of the power of peppers and other spices. Each reference description is accompanied by the spice level on this scale, which was invented by pharmacologist Wilbur Scoville, in 1912.

Sources : *jeretiens.net/les-5-anciens-comptoirs-francais-de-linde/, **wikipedia, ***Vertus médicinales des plantes aromatiques (2012) by Jean-Claude Rodet, **** One of the oldest medicinal and culinary plants in the history of humanity (passeportsante.net).