The new lightning of Saint-Theodorit's cathedral

Inaugurated on Tuesday 12 April 2022, the new illumination of Uzès cathedral has enabled the architectural heritage of the building to be highlighted.

Saint-Théodorit (whose bell tower, the famous Fenestrelle Tower, has been listed as a Historic Monument since 1862, and as a whole since 1963), has benefited from the intervention of SPIE Alès (Société Parisienne d'Industrie Electrique), the work of Sylvie Sieg, lighting designer, Jean Christophe REY Tekhnelec BE ELEC, and Frédéric Fiore, heritage architect.

Today, the great 17th century organs are magnified, the choir is sublimated, the painted ceilings gain in depth, and the Fenestrelle tower shines in the night.

"Light should not be seen as the ultimate added value, but as a component of the public space or of the architecture, which reveals and enhances..." (Sylvie Sieg) 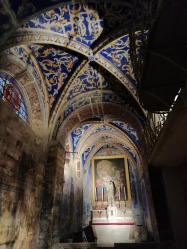 Trained as an architect, Sylvie Sieg has specialised in lighting since 1995. For her, lighting design enhances exterior or interior heritage, whether on public or private properties.

Lighting design? "It's about revealing the beauty"

Llighting of historical monuments (such as the cathedrals of Narbonne in 2013 or Montpellier in 2016), enhancement of cities (the park of Les Balaruc-les-Bains in 2012), or modern architecture (the exterior of The Island in 2018 or the Crédit Agricole branch in Nîmes), Sylvie Sieg is an adept at making buildings gain from brightness through the use of light.

But how is a building site designed? Sylvie Sieg explains everything.

The rebirth of Saint-Théodorit cathedral through its brand new lighting is a real success. Can you tell us how the project went on, from the preparation phase to the installation of the lighting system?

First, there was a call for candidtates, each of them presenting a project for Saint-Theodorit's Cathedral.

Once the team had been selected, we embarked on the design of the new lighting between September and November 2021, followed by in situ tests: the equipment was tested, the layouts as well as the colours - several shades of warm light, tests of the lighting system...

We understantd that lighting is a team effort. Who do you usually work with?

Indeed, heritage enhancement is above all a team effort. For this project, I collaborated with a heritage architect and an electrical design office. SPIE, a company specialising in lighting, was chosen from among eight companies to carry out the work.

I also sometimes work with architects from the Monuments Historiques, or Compagnons du devoir, as it was the case for Montpellier cathedral. These are enriching encounters for our respective professions.

What was the challenge of enhancing Saint-Theodorit cathedral? Did you have to meet specific specifications, given that it is a historical monument?

We worked closely with the DRAC and the ABF, who ensured that the cathedral, which is a protected monument, was preserved. We had to avoid damaging the walls, the furniture or the decoration. This is a great responsibility that we take to heart.

How did you imagine the context of the light?

We established 7 scenarios to adapt to the liturgy.

There is the daily mass, the Sunday mass, the "visits" scenario which allows the lighting to be modulated according to the passage of visitors, the one for Easter mass, the night mode, which highlights the Fenestrelle tower on different levels and goes out at a given moment... in a way, to show the architecture at night differently than during the day, to tell a story. Light fascinates and amazes...

The system is very easy to use, controlled via a tablet, in the sacristy, or via the priest's mobile phone. The lighting can be modulated as desired.

-There are only 80 lighting designers in France.

-Sylvie Sieg is a member of the AFE, the French Lighting Association, founded in 1930, and of the ACE, the Association of Lighting Designers and Lighting Engineers, created in 1995: "A new generation has been asserting itself in recent years. There are much more women in the sector, made up of architects, landscape architects or qualified designers, it gives a new face to the profession" (ACE)

-Sylvie Sieg's next project, the lighting of Béziers cathedral, will be inaugurated on 21 June 2022.

Thanks to Sylvie Sieg, architect and lighting specialist, for her collaboration with this article.