Catherine Berry: a challenging, but rewarding, life in France

Several years ago, Australian-born author and French teacher Catherine Berry convinced her husband to leave their comfortable, suburban life in Melbourne to go and … live in France with their three young children.

From this beautiful, but at times challenging, experience Catherine wrote the book, “But you are in France, Madame”. She has since written two more memoirs: one updating her readers on her French life and the third, just released, heads back to her childhood in Adelaide, Australia.

When her family’s initial French adventure came to an end and they returned to live in Australia, Catherine struggled to turn the page. Purchasing a home around the Annecy Lake⏤the area that they had grown to love⏤helped with this transition. The moment was the culmination of a long-held dream, and it was important that the name that they choose for their home be both representative of their journey and symbolise their affection for their French lives.

“‘Why not Le Cormoran?’ I suggested to my husband.

‘It suddenly seemed obvious. We were like the migratory birds⏤happy to settle for a while until the call of something, or somewhere, else became too strong.’”

From idiomatic to cultural gaps, from French habits to adaptation to a life in a new city, Catherine weaves her entertaining and personal story in “But you are in France Madame.” 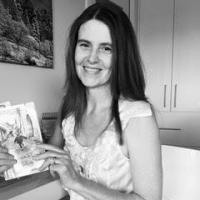 Hello Catherine, or should I say … Bonjour!

First of all, thank you so much for participating in the UzEssentiel Interview’s section.

You have just released a third book, so now is a good time to have an aperçu of your first memoir, “But you are in France Madame” that you published in 2015.

It is a witty book where you share your experience of living in France. What gave you and your family the initial start for this adventure?

I was introduced to the French language in high school and, as my three sisters will attest, loved it so much that I adopted a French persona from that time. Fast-forward many years and, with a degree majoring in French and a teaching qualification en poche, I set out to share my love for the language. When my third child was born, I started speaking only in French with him. This transformed the Australian lives of my husband and three children until the most logical conclusion of my somewhat unintentional language experiment was to go and live in France.

“D-Day (Jour J) arrived. It wasn’t excessively cold, but I shivered and shook constantly. No doubt this was partly due to my heightened emotional state…”

For how many years did you live in France, and how did you choose the region you moved in?

We left Australia with a one-year plan, but it became obvious soon after our arrival in France that one year would not be enough. In the end, we managed to stay for three-and-a-half years. Choosing the Haute Savoie, and Annecy in particular, was a lucky fluke. With our tickets booked and still no specific destination or schools for the children sorted, my husband was reading the “Lonely Planet France” when the page fell open at Annecy. He asked me if I had heard of the town. “Well, one of the pages in the textbook that I am using to teach my year Seven classes features Annecy,” I answered. In truth, I knew very little, but we kept reading and were captivated by the idea of the lake, the mountains, the proximity to Italy and Switzerland and that was that. One decision made.

What motivated you to move to France instead of another European country? Did you and your husband speak French before moving?

As a child, my parents took my sisters and me to live in Scotland where my father was on sabbatical at Edinburgh University. We travelled a lot that year, but not to France. There is no doubt that this time overseas was a gift: one that I wanted to give to my own children. Yes, I did speak French prior to going to France. The only other member of 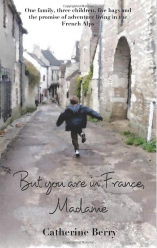 our family to do so was my son … but he was only six, so his contributions were limited. I must admit that I did feel the pressure to “get things right.”

What were your first steps when landing in your new life? And how did you manage your professional life when moving abroad?

Our number one priority on arrival was ensuring that the children were as happy as they could be in a new country, new school, new language and without friends or family nearby. Children are amazingly resilient and, whilst it was not easy from the start, everything that they did was either a wonderful experience or a new learning opportunity. Regarding our professional lives: my husband took a year’s leave from his job but resigned when we made the decision to extend our stay beyond our initial year, and I had already resigned from my teaching job. It was a terrifyingly liberating period.

“Some months before, my husband, three children and I had casually unzipped and discarded our comfortable Australian lifestyle

and slipped on life in the country of ‘haute couture’…”

Was “But you are in France, Madame” your first attempt to write a book? Did you have any experience as a writer or an editor?

“But you are in France, Madame” was my first book. Prior to that I had written a master’s thesis and educational articles, bulletins and reports but nothing as major as a book. When on maternity leave with my third child, I had undertaken extra study to teach English as a Second language and had done an editing course. I must have known subconsciously that both would be of use in my future. 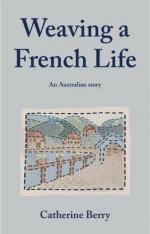 “Weaving a French Life: An Australian story” is your second book... What is the subject of this 2nd book? Is your return to Australia the main subject? After three-and-a-half years spent in France, why did you take the decision to go back to your homeland? And do you have any intention of returning to France for another long-term stay?

I wrote “Weaving a French Life” during 2020 and the uncertainty of the Covid-era. It came out of nowhere, but the opportunity to look back on my French journey helped me to believe that one day we might be able to look forward again. Our decision to return to Australia was not easy and neither was being in Australia once back. We all struggled in different ways to find our feet. Ultimately, purchasing a home in France was one step towards reassuring us that our French adventure was not over entirely. We return to France as often as we can and each time fall under the same spell, although it would be great if the two countries were just a little closer.

Do you want to add anything, maybe an anecdote or a particular experience?

I have just released a third memoir, “With bare feet and sandy toes: Growing up in Australia in the 1960s & 70s”. This one does not take my reader to France. Rather, it heads back to my early years in Adelaide, Australia. I am hoping that those who have joined me thus far will keep me company as I venture in a different direction. Memoir writing is, by definition, so personal and challenging and I’m still not 100 % sure why I do it. The global connections that I have made with people who share my love for France; however, have been truly astounding, unexpected, and special. I guess that is a big part of the answer.

Many thanks to Catherine Berry for her participation to this article.

Find out more about the books of Catherine Berry.