Mushroom picking with the Mycological Society of Alès, part 2

(FR) - Here is the second part of our paper on mushroom picking.

The Mycological Society of Alès still helps us through our search to know better what to pick and the regulation on mushroom harvesting. 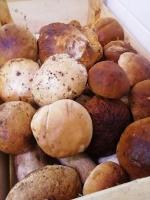 Mushroom picking and its regulations

You can start picking mushrooms if, and only if, you respect both... nature and the laws of each commune.

You must also take care to harvest only authorised mushrooms, depending on the territory, the season, etc, and also respect the maximum quantity allowed to pick, which can vary from 2 to 10 litres per day and per person (more information on the regulations on the SMA website).

You organize mushroom picking around Alès. Do you propose outings in other towns in the Gard?

Yes, we do organised mushrooms' picking, but many other activities.

Mycological field trips, which take place on Sundays in different places around the Gard, Lozère and Ardèche: from September to December about 2 to 3 trips per month, and from January to June, about 1 trip per month.

There are also our mycological identification meetings, which take place at the Espace André Chamson in Alès, salle Dullin, on the 2nd floor, from 5pm to 7pm: every Monday (except during school holidays) from September to December, and one Monday a month from January to June.

Please note that the SMA's programme of activities for the dates of meetings/outings and places may change depending on the weather and the presence or absence of mushrooms.

In case of doubts about your picking?

In doubt, it is absolutely necessary to have your harvest checked by contacting the nearest mycological society, which will address you to an experienced mycologist. You can also go to a chemistry, provided that there is a pharmacist trained in mycology.

If there is an intoxication, symptoms can occur rapidly after ingestion, usually within an hour, but also later, up to a few days later. In general, the sooner the symptoms appear, the less serious the intoxication. As soon as the first symptoms appear (digestive problems, nausea, vomiting, stomach ache, diarrhoea, trembling, dizziness, muscle pain, visual problems, sweating, etc.), contact the nearest anti-poison centre as soon as possible or the fire brigade on 18 or the Samu 15.

A piece of advice: before cooking and eating any mushroom, take a photo of the species consumed. In the event of intoxication, this will be very valuable for identifying the mushroom in question and above all for defining the type of intoxication, which will facilitate the medical treatment of the intoxication.

The Mycological Society of Alès - portrait

Founded in 1976, the Mycological Society of Alès (SMA) is "the only mycological society in the Gard" and is part of the Federation of Mediterranean Mycological Associations (FAMM).

It is the successor to the "Association des Mycologues Alésiens", founded in 1969, chaired by the professor and poet André Antonin, who had surrounded himself with specialists and amateurs".

During the 6th exhibition of the Association, "a thousand cryptogams corresponding to more than 300 species had been presented and determined".

With the help of expert mycologists, the members of the Mycological Society of Alès study and determine fungal species during meetings. Anyone is welcome to have the mushrooms harvested identified by an expert mycologist.

The Mycological Society of Alès organizes every two years a mycological exhibition of fresh mushrooms with lectures on mycology open to everyone, in order to inform, educate and exchange on mushrooms.

There are also mycological outings - for SMA members only - all year round in the countryside (Gard, Lozère, Ardèche), collecting both edible and non-edible mushrooms.

The main goal of these outings is learn to identify the species present at the place of the outing in a respectful manner and to improve one's ability to recognise the different species by learning the specific determination criteria with the help of our mycologists.

Do you have advice for mushroom collectors?

In order to ease the identification, the mushroom has to be collected entirety. It should be dug up with a knife and not cut, as the base of the stalk may contain important characteristics for identification.

If possible, note the biotope (under which tree, nature of the ground, altitude, etc., which are sometimes essential elements for identification):

-Do not collect mushrooms from polluted areas (industrial wastelands, rubbish dumps, busy roadsides, etc.): mushrooms are sponges and some species more than others can concentrate heavy metals, radioactive substances, pesticides or other toxic substances present in the soil.

-Never collect mushrooms in a plastic bag, which encourages maceration and can lead to bacterial contamination, making the mushrooms unfit for consumption. Prefer a basket or paper bags.

Harvest only fresh and healthy mushrooms and avoid picking worm-eaten or frost-seized specimens: because mushrooms can become toxic or indigestible once they are aged or frozen, due to the decomposition of the flesh of the mushroom with the risk of parasites or bacterial contamination.

-Keep the mushrooms in a cool place and eat them quickl,y within 2 to 3 days maximum after picking.

Always cook mushrooms thoroughly for at least 15 minutes and at least 30 minutes for edible species that are poisonous when eaten raw (morels, amanita, red-footed boletus, etc.).

Mycological reading recommended by the SMA

Good to know: a website, Mycodb, with its interactive mycological database.

Many thanks to Vanessa Bozec, President of the Mycological Society of Alès, and Gérard Scotto, Vice President, for their collaboration on this article