Going to Saint Victor la Coste for a walk

French version - Here we are at Saint Victor la Coste, a small village at about 20 kilometers from Uzès.

Walking down its street, starting from the town hall to the fountain of the Centenaire de la Révolution (Centenary of the French Revolution, 1889), going up the street des Remparts (of the Ramparts) or of the Tour de l'Oume (Tower of the Oume, a prison in the 17th century, now the church tower), we get little by little to the feet of the Castellas, the castle up the hill.

Did you know ? On the base of the fountain of the Centenary of the French Revolution, in front of the town hall, are written some arithmetic and geographic inscriptions, such as the distance between the main towns of the Gard, the altitude, calculated using the Paris meridian, no the one of Greenwich.

Second stop after the town all, the church of Saint Victor /17th century), with its lovely corner tower, a reminder of the old ramparts of the town. Saint Victor succeeded to the old church of Sainte-Madeleine, which ruins can be seen down the castle.

The corner tower of the church was one of the 4 towers of the old ramparts, along with the tower of la Gardette (known as the tower of la Poterne - a poterne being a small and hidden entrance in the fortification to the village for the inhabitants), the Median tower and the tower of the sunset (an old watch tower).

Still going up, we then get to the start of the path leading to the castellas, the fortified castle, classified as Historic Monument.

Owned by the lords of Sabran, who decided to build it around 1125, the castle is looking now peacefully at the valley of the Tave, but at the beginning was a protection for the population whenever needed. Dismantled in 1248, rebuilt at the end of the 13th century, the castle changed owners many times. During the French religious wars, a garrison was living behind its walls. From its origins, just still 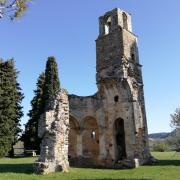 stand up the little chapel (12th century), some windows and few steps of a 15th century stairs.

The castle was restored by the association of the friends of la Sabranenque, who took care of the place and preserved it with the help of volunteers, for the last 50 years.

Last stop before leaving Saint Victor la Coste, or just before getting there, depending from where you come from, do visit the Roman chapel of Saint Martin, classified as Historic Monument too. Built around 1050, just stay up the semicircular apse and the church tower.

Did you know ? Saint Martin seems to be quite appreciated in the Gard : Bishop and soldier, he spread the word of Christianity in Provence in the 4th century. His name was given to the church of Serviers Labaume, to the one of Aiguèze and to another one, near the village of Tresques, among others.

On the land where is built Saint Martin was certainly a Roman villa. After that, the place hosted the regional market before its transfert to Bagnols, in 1223.