The most beautiful villages of France

One of the best way to prepare your trip around France, or just to learn more about the country, here is the publication of Les plus beaux villages de France in its English version.

"Discover the 164 most picturesque villages in France, selected for their authenticity, beauty, and cultural heritage by the accredited association Les Plus Beaux Villages de France". 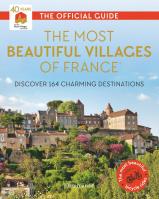 Want a glimpse of the Most beautiful villages of France ? Just ask !

This fully-updated fortieth anniversary edition is an essential resource for enjoying a memorable trip through the most beautiful villages of France" (Flammarion).

In the Gard, learn more about "Aiguèze A phoenix from the ashes Gard (p 142, and around 50 kms from Uzès) : A fortress perched on a cliff overlooking the Gorges of the Ardèche, Aiguèze protects its medieval heritage, cultivates vines, and ensures its inhabitants are always friendly and welcoming. Like any strategic defense site, Aiguèze has had a turbulent past. From 725 to 737 ce, the region was occupied by the Saracens, who gave their name to one of the village’s towers. The fortification of the site dates back to the 11th century: it was the work of the count of Toulouse, who wanted to make Aiguèze the outpost for his operations against the region of Vivarais. In 1360, uprisings caused Aiguèze its last great period of turmoil: local peasants, oppressed by hefty taxes, became restless, and the village endured more destruction and looting"... (Read UzEssentiel special paper on Aiguèze, first published in French in September 2021)

Lussan, at about 20 kms from Uzès : "Set on a rocky plateau high above the garrigue scrubland, the walls of Lussan bear traces of a rich medieval history. With its near-circular silhouette surrounded by ramparts, a panoramic view over the Cévennes and Mont Ventoux, and stone façades bleached by the Midi sunshine, Lussan is the archetypal medieval village of the Languedoc region"...

And the enchanting village La Roque-sur-Cèze, by the Sautadet waterfalls, 33 kms from Uzès : "Surrounded by garrigue scrubland, La Roque-sur-Cèze has established itself on a rocky slope overlooking the Cèze river and surrounding vineyards. Past the Pont Charles-Martel with its twelve arches, along steep, winding, cobbled streets, lies an endless jumble of buildings, rooftops, and covered terraces, whose sun-weathered stone walls and Genoese tiles give them a Tuscan feel"...

Many thanks to Samantha Evans, READ MEDIA, for the press kit.