The Causse Méjean and the Przewalski's horses

FR - The horses of Przewaslki were reintroduced in the wild Causse Méjean region in the 1990s, thanks to the intervention of the Takh foundation, and now run freely in the exceptional site of the Cévennes Natural Park.

The current community of about 50 horses is descended from Przewalski's first horses, which were living in European zoos. 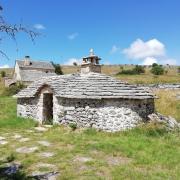 The Causse Méjean and the Villaret hamlet

The rustic Causse batisses, typical low and strong limestone houses, are distributed throughout the hamlet, which has been designated a World Heritage Site since 2011.

Even though the shepherds have long left, preferring the Mount Lozère and the Aigoual, the Foundation Takh has kept the place alive since 1993.

It's worth noting that in, the tenth century, the Causse Méjean was home to several abbeys, including the one of Saint Chaffre. The cellae – small agricultural communities near communication axes, are at the origins of the hamlets we visit today (learn more on the National Park of the Cévennes website)

It's worth knowing, too, taht the Cévennes National Park, which includes the Ardèche, Gard, and Lozère, was established in 1970 and has five mountains: the Aigoual, the Causse-Gorges, Mount Lozère, and the valleys of the Cévennes, as well as 122 localities. It is one of France's 11 national parks, as well as a Biosphere reserve since 1985 and an International Dark Sky reserve since 2018.