The medieval city of Sauve

French version - The medieval city of Sauve discloses its historical heritage to us starting from its old bridge (12th c), then strolling along its small streets and alleys, in and out of the ramparts, and up to the Jean Astruc or Sivel squares, or the Conservatoire de la fourche – the museum dedicated to the pitchfork, specialty of the city. Once the capital of the region of Salavès, Sauve was certified Village de caractère in 2008

Built at the foot of the massif of Coutach, which runs 25 km from the city of Claret and finishes its ride right here, Sauve, overlooked by the Roquevaire castle (17th c), is caught between stone and water, as the river Vidourle, which has its source at about 12 km from Sauve, near the village of Saint Hippolyte du Fort, runs along the city.

What else ? Well, the street of the Fusterie which reminds us of the fustiers, the woodworkers, the hôtel de la Monnaie (11th c), the house of the Earls, the little square of Pialo, etc, are some of the other spots you will definitively enjoy in your sightseeing.

Good to know : If you go down to the riverside, you will discover the place where the river comes out after its subterranean trip from its source. 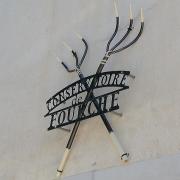 All together, there are 19 panels explaining the history of the medieval city.

By the Office de tourisme – the tourist information office, located in the cazernes (18th c) – barraks of the Dragons du roi – Horse Guards, another panel presents the circuit of the Mer des rochers – the Sea of rocks, a 2 km long walk in the heart of the nature of the Cévennes.

Next to the tourist information office, do visit the museum dedicated to the pitchfork, this useful farmers' tool, made of hackberry wood, specialty of Sauve.

Spending the day in Sauve gives you, as well, the opportunity to taste the local French cuisine and the wine of Cévennes. 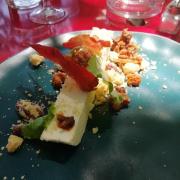 Why don't you book a table at the restaurant Le Bossens - which took residence in the old city hospital named... Bossens just 3 years ago, for example (as you will find many more in the city) ? Homemade dishes and regional wine, yummy !

Give a try to the cornflower panna cotta maison, or the pulled pork burger, less traditional and much more international, and have a glass of regional wine Domaine de Cauviac (Le Bossens, 11 rue Mazan, opened from April to October, booking highly recommended : 06 47 06 85 62).

Did you know ? The Piémont cévenol, where is located Sauve, is home to 34 typical and truly traditional villages