FR - At about 35 km from Uzès, Vénéjan is a hidden treasure.

With overlooking castle and chapel, Vénéjan brings a peaceful feeling to whoever comes to visit. From the Clock tower to the Saint Jean-Baptiste's chapel If you wish to visit the city from its center, then start with having a look at the Clock tower (1843), the place of the first city hall.

Then it is possible to reach the upper part of the city through the terrace gardens which combine the poetry of the calades (those cobbled paths typical of Provence) to the charm of the green spaces, and enhance the restauration work that the municipality undertook since 1999.

Watching the streets downwards, the Saint Jean-Baptiste's chapel and its little cemetery, abandoned around 1860, are standing next to the ruins of an ancient watchtower (10th century), where once stood the ancient dungeon that protected the city.

On the walls of the church, the wall paintings of the 14th century show the Papal court of Avignon's influence and the prosperity of this land, at that time. Those exceptional paintings highly contributed to the inscription of the chapel to the Monuments Historiques in 1986 (the French Heritage).

From the windmill to the castle 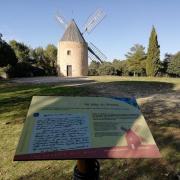 Near the chapel, there is a park where stands a lonely windmill. The Vénéjan windmill, built in 1813, had been restored at the end of the ’90 and inaugurated in 2000.

A parking lot, a few meters from there, allows you to leave your vehicle and start your visit by the upper part of the city.

From the little promenade in front of the church, you have the best view to the castle of Vénéjan, a private property today, and once the historical house of the family de Béziers, then of the d’Ancezune, de Grignan (whose last descendant appeared to be the son in law of the famous Marquise de Sévigné).

Registered too at the Monuments Historiques in 1996, the Saint Pierre's chapel , of the 12th century, can be seen near Vénéjan, at L’Olivette.