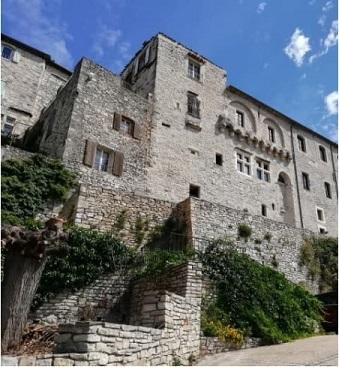 Vézénobres, a medieval city capital of the fig

FR - Vézénobres is a medieval city located at 11 km from Alès and at about 40 km from Nîmes,.

On top of an ancient oppidum, Vézénobres is a great place to go and visit on spring or summer time. And if you bring along a picnic to enjoy in the country side, the visit will even be a great family time.

Vézénobres is a pure jewel, appreciated already by the Celts and Romans in earlier centuries. The Roman road connecting the place to the North of France, very popular from the 11th c to the 13th c, includes the Régordane path, with was travelled by the pilgrims on their way to Santiago de Compostela.

The path is, since 2007, a walking trail, the GR 700, which follows more or less the historical trail and lead to Le Puy en Velay, in Auvergne.

The city of Vézénobres has two castles. The well restored 14th century castle of Girard, with its muntin windows and arrowslits. Its sober front, part of the city high walls, overlooks the fig trees, down below. 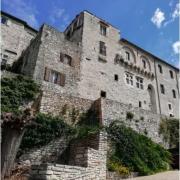 Temporary exhibitions take place in the vaulted halls of the castle bedrock, which hosts the Tourist office and the Fig museum.

The large Maison de la Figue (House of the Fig) is dedicated to the Mediterranean tree from the Mulberry family. We learn more about its distinctive characteristics, flagship of Vézénobres economy for centuries.

We are offered a tour around the world to discover all the varieties of the fruit : Brown Turkey figs, leading country in its production and exportation, the Violette Moscatel, the exotic Jahlash, and so on. We learn more about its production, and are invited to have a closer look to the fruit at the conservatory orchard below the Maison de la Figue which hosts, since 2000, the double of part of the fig trees collection of the Conservatoire Botanique National, settled on the island of Porquerolles, in the Var. This collection is rich of a thousand trees, of more than 100 fig varieties, on more than 180 hectares.

In the eastern part of Vézénobres, known as the Sabran gate and as the Clock gate (one of the 5 gates entering the city), was built in the 14th century. At the top of it, a church tower and a large clock, added in the 18th c.

A village with personality

Overlooking the down below plain, Vézénobres is one of the 5 Character Villages of the Gard, along with Barjac, Lussan, Dourbies and Sauve.

On top of Vézénobres, in the North part, you will find the fort gate, the aura gate in Occitan. One of the city gates with drawbridge, it gave access to the city. Nearby, you can have a look at the viewpoint indicator erected in 1968 and at the ruins of the fort before going back to the village centre.

You will then crossed the last 30 m high standing wall of the 12th century Montanègre castle. Known as well as the Fay-Pairaut castle, it was mostly destroyed in 1628.

To end the visit, here is the Hôtel de Montfaucon, the house of Adam and Eve, in the lower part of Vézénobres. This Renaissance style elegant mansion was built in 1574 by François de Montfaucon for the Vézénobres countess. The pediment of the entry door inspired by Italian architecture, is very delicate. The restauration of the top of the mansion’s tower, destroyed during WW2, is due to the new owner, with the help of the architects of the Bâtiments de France.