Mushroom picking with the Mycological Society of Alès

UK - Autumn is quite a good time to pick mushrooms.

The undergrowth promises beautiful discoveries, between chanterelles, ceps, but also....

This is the first part of the UzEssentiel dossier devoted to the mushrooms of the Gard.

Find out the Gard mushrooms, advice for picking the right ones, with the Mycological Society of Alès. 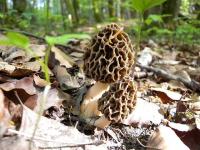 Overview of the mushrooms of the Gard

Which mushrooms can be found in the Gard? Well, morels, ceps and chanterelles are, without any doubt, the best known and, above all, the easiest to find.

Then, from January, the black truffle is to be looked for. Good to know for the amateurs: the truffle is celebrated in Uzès with the Black Truffle Festival.

THE MYCOLOGICAL SOCIETY OF ALES answers our questions

But what other edible mushrooms can be found in our region? There is the hairy coprin... Can you tell us more?

We therefore always work with the Latin name that guarantees that we are talking about the same mushroom, that is the universal name: first the name of the genus, followed by the name of the species: Lactarius deliciosus (Delicious Lactary), Boletus edulis (Bordeaux mushroom).

Secondly, it is also very important to take into account the biotope of the mushroom. Some species will only be present under certain trees (pines, spruces, holm oaks, firs, birches, beeches, etc.).

In addition, the nature of the soil is also fundamental.

When we say milkcaps, we are talking about a genus, and there are many species in this genus Lactarius.

The particularity of the milkshakes is that, when they are cut at the level of the lamellae, milk flows out. The observation of the colour of the milk is important for identification too.

Within this genus, those that are edible and highly appreciated in the Gard are the milky mushrooms of a rather orange to winy colour (also known in our region as sanguines or safrans: a vernacular name that can change from one region to another).

-The delicious milkcap (Lactarius deliciosus), which is orange in colour, only under pine trees, with a bright orange milk and whose orange lamellae will tend to become stained with green.

This delicious milkcap is ok, but is often mistaken with the detestable milkcap (Lactarius deterrimus) which only grows under spruce trees and the salmon milkcap (Lactarius salmonicolor) which only grows under fir trees. The latter two strongly resemble the delicious milkcap but they do not grow under pines and the flavour of their flesh is unpleasant, pungent, astringent to bitter.

Although not poisonous, they are to be rejected from consumption because of their bad taste. However, they are very often mistaken for a delicious milkweed and eaten by mistake, whereas they have no culinary interest.

Blood and semi blood lactates have an orange to wined coloured cap which tends to turn green and their milk is blood red to reddish in colour, becoming more wine red to brown on contact with the air.

There are 4 species considered as ceps, they belong to the genus Boletus and these 4 species are very similar, and are all very good.

-There is the Boletus edulis (Bordeaux boletus), found under deciduous and coniferous trees, very present in our regions especially in autumn from September onwards

-Then the Boletus aestivalis (summer boletus), which is picked under deciduous trees. It is only present in our regions in summer, from May to September.

-The Boletus pinophilus (pine mushroom) is easily found in our regions from the end of summer to the beginning of autumn, and can only be discovered under pine trees

-The Boletus aereus (bronze boletus), which grows under deciduous trees and oaks, is more present in summer, but quite rare in our regions.

The mushroom pickers must not destroy on the spot any mushrooms, even if they believe them not to be of any culinary interest, or are poisonous.

Mushrooms are part of our ecosystem and should be respected: Edible, toxic, deadly, to be rejected, they all have an essential role in the ecosystem.

In autumn, other mushrooms can also be found, but generally with a later growth:

However, be careful not to confuse it with the very toxic Olive Clitocybe (Omphalotus olearius), which can be found not only near an olive tree, but also under deciduous and coniferous trees, nor with the false chanterelle (Hygrophoropsis aurantiaca), which is often indigestible and responsible for gastrointestinal disorders.

These two species are often mistaken for a chanterelle, but the major difference is that the chanterelle has folds under the cap and not lamellae.

-Sheep's feet (Hydnum repandum), which are widely consumed, have stings under the cap that must be removed before consumption and of which it is better to consume the young species in order to avoid a too pronounced bitterness.

-The trumpet of death (Craterellus cornucopioides), very good too, black in colour and quite easy to recognise, with its shape of a horn of plenty (hence its Latin name).

-Hairy coprins (Coprinus comatus) can be found in the grass of meadows and often at the roadside. Only very young specimens (well before the lamellae blacken and the mushroom opens) can be eaten, always well cooked, as they blacken and become deliquescent with age and are unfit and indigestible for consumption.

-Morels are more of a spring mushroom. In our region, the morel (Morchela esculenta) can be found mainly on sandy ground in deciduous woods, often under ash trees and on the edge of watercourses or on chalky ground. They are good edible but beware, they are poisonous when eaten raw. They must be dried and then cooked well before being eaten.

-In theCévennes, you can also find the Hygrophorus marzuolus, which are the first mushrooms of the year, and which can be collected from February onwards. They are very good edibles and are very popular at a time when edible mushrooms are scarce.

Two mushrooms were considered edible in the past. Unfortunately, they are still widely consumed in our region today, but their toxicity has been highlighted in recent years. We are talking here about:

It has been found they have a cumulative toxicity causing massive damage to the muscular system, which can lead to serious to fatal heart or muscle damage.

-and the honey-coloured armillaria (Armillaria mellea), a mushroom that grows in clumps at the foot of a dead tree and is called in our region "Soucarel".

Some books still present it as a good edible. However, it is nowadays strongly recommended not to consume it any more because it is responsible for numerous gastro-intestinal intoxications and it seems to contain long-term toxic substances.

It is also very important to be familiar with the death cap mushroom, which is present in our region. This fungus, classified as deadly, is responsible for liver transplants or deaths every year in France, because it causes the destruction of liver cells.

It is often known to the public as a mushroom with a red cap, white spots, a volva and a white foot. This description actually corresponds to the fly agaric, Amanita muscaria, which is classified as toxic but not fatal.

The fly agaric is an inconspicuous fungus with an olive green cap (which can vary in colour; sometimes the cap can also be white). Its foot, lamellae, ring and enveloping volva are white. If the mushroom is cut at the foot, the volva is no longer visible, which makes it possible to identify it.

Many thanks to Vanessa Bozec, President of the Mycological Society of Alès, and Gérard Scotto, Vice President, for their collaboration on this article