The Musée Borias, in Uzès

French version - Created in 1910, uniting the collections of Fine Arts and local history, the Borias museum of Uzès was first located in the town hall.

Since 1978, the museum is situated in the old episcopal palace, becoming neighbour of the local court. 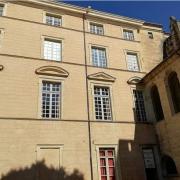 Origins and history of the museum

At the very beginning, we have to remember the work of José Belon (1861/1927), a painter native of Alès. Trained at the Fine Arts school of Paris, he asked at that time his artists friends to participate to the museum by giving some of their works.

Then came the initiative of French poet Albert Roux (1871/1935). Farmer of the Gard above all, born in Sanilhac and fond of his region, the poet was writing tales and legends in Occitan, as well as stories inspired by the work of another French writer, Frédéric Mistral.

The creation in 1896 of the Museon Arlaten of Arles by Mistral catched his interest, as the museum placed great emphasis on the Provençal arts, calling upon the local population to help protecting the region heritage, a culture that Mistral thought was going to gradually disappear.

From Arles to Uzès, there is only one step, and the Museon of Uzès, desired by Albert Roux, was born

Albert Roux, who was collaborating to the Journal d’Uzès, the former Républicain, with stories on the local history, asked the local population for private donations : came then great surprises, from a cabinet of curiosities to paintings and archaeological findings.

Left without care during the 2 World Wars, the public museum reborn in 1946 under the action of Georges Borias (1908/1988). This French teacher from Auvergne, who arrived in Uzès after having worked in many other French regions, took the responsibility to preserve the museum. With the help of his older students, they worked on the restoration and the filing of the museum collection. A tremendous work.

Curator of the place for 40 years, Georges Borias developed the museum and expanded significantly the collection. Located since 1978 in the old episcopal palace of Uzès, classified historic monument in 1981, the museum is named after Georges Borias, who died in 1988. A tribute to his amazing work.

Martine Peyroche d’Arnaud, author of a thesis on Uzès architecture for the school of the Louvre and of the Abédécédaire d’Uzès (Alcide Editions), replaced Georges Borias as curator. She is the one behind the museum we visit today.

Then came Brigitte Chimier, who took over Martine Peyroche d’Arnaud who had retired in 2003. With a degree in Modern Art, nothing destined Brigitte Chimier to this kind of work. Nevertheless, the present curator brings her expertise and her commitment to the job for 20 years now, together with the help of the person in charge of the reception desk and the association Les amis du musée (the association fo the friends of the museum).

Nowadays, Brigitte Chimier works to the recognition of the museum and continues to enriching its collection thanks to private donations – such as this drawing of Charles Gide offered by the president of the association Les amis du Musée, Frédéric Abauzit, legacies, acquisitions – such as 7 works of André Gide and his grandfather, the painter Théo Van Rysselberghe from the daughter of the writer, all these actions punctuating the life of the museum, together with the interactions with schools, conferences and visits.

Visite guidée of the museum with curator Brigitte Chimier

Between animations, visits to the object of the month, collaborations with schools, the museum of Uzès participates actively to the town’s life. 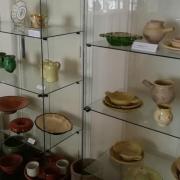 Divided in different collections, the museum takes the visitor around the history of Uzès and the region. Souvenir of a cabinet of curiosities, Gallic and Roman history, Middle-Age, but as well a rich collection of coloured wardrobes from Uzés, the museum is full of surprises. Look for example at this peculiar sawing machine for silk stockings rented to workers by the retailers, reminding us of the economic expansion of the city due to industry of silk worms. Have a look too at the portrait of the duchess of Uzès, painted by Adolphe Weïsz in 1913 or the colourful La lutte d’hommes, painted by the French painter José Belon.

Then come the department dedicated to the potery of Uzège, an activity which pratically disapeared after the first World War before coming back in Saint-Quentin-la-Poterie early 80s. Through the loan of the private collection of Jean-Paul and Christophe Pichon, we follow the evolution of the creations of the family factory, founded in 1802.

Last but not least, the André Gide heritage

Last room of the museum, the one exposing the heritage of French writer André Gide. (1869/1951), whose family was from Uzès and nearby.

Photographies, books, paintings..., we gradually follow the life of the artist. Founder of French litterary magazine La Nouvelle Revue Française in 1908, the writer was a passionate of life and travels, known for his commitments.

Good to know : The museum is part of the network of Musées-Occcitanie.fr,

The object of the month’s visit : A Thursday per month, come and discover an object selected by Brigitte Chimier. Next visit : the 21st of October, the 18e c sedan chair, the 18th of  November, the shepherd dog belt, the 16th of December, the portrait of Janie Bussy, by painter Jean Vanden Eeckhoudt (1875/1946). RV at 16 h for a one hour visit, 1€50/person, 10 persons maximum, book your visit on musee.uzes@wanadoo.fr.

Come and meet Brigitte Chimier at the conference she will be giving on La petite histoire du musée d’Uzès at the université Populaire de l’Uzège. 2h to know better the museum, Monday 31st of January 2022. Free, booking inscription. Brigitte Chimier has wrote too some booklets for the Association des amis du musée d’Uzès, and a Guide des tableaux des églises d’Uzès (2006).

Read some of the publications of the Association, such as Les 100 ans du musée, or Georges Borias.

Many thanks to Brigitte Chimier for her collaboration to this paper and the guided visit.