Nicole Besnainou, between sculpture and painting

UzEssentiel editor had the pleasure of meeting Nicole Besnainou, an artist who was awarded a prize by French Academy of Arts, Sciences and Letters last October, along with the painter Erick Millet from Bouillargues, among a selection of international artists.

A drawing and painting passionate since her youth, Nicole Besnainou also became enthusiastic about sculpture at the age of 17, being between 1992 and 2009 a student of Philippe Chazot, a self-taught French sculptor who magnifies the human body. There "she learned rigour, a different relationship with the earth and time... her sculptures kind of springing from the material".

"When a... sculptor creates human bodies, he does not only represent the musculature, but also the life that warms them". 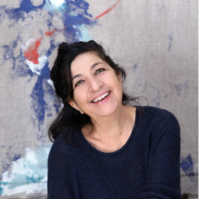 Nicole's own style was born, "opposing a raw clay worked in a primitive way by striking it, striating it, to meticulously sculpted faces. Faces appear, expressions of men and women who one day have crossed her path, from Mali to India, via Mexico, Cambodia, Japan, Indonesia...".

A school teacher for 33 years, Nicole Besnainou, after sharing her passion for the arts and her techniques in drawing, painting and sculpture with her pupils, decided to take the plunge and devots herself entirely to her artistic career for the last 8 years. She exhibits some of the  best of her works in her gallery, La Petite Maison Rouge, just a stone's throw from the Uzès town hall.

Because art is a common language, an opening to the outside world (Nicole Besnainou)

There, a delicate forest of sandstone and bronze sculptures welcomes the visitor, while the stone walls serve as a setting for her paintings. The complexity of the limited space of La Petite Maison Rouge offers the highlights her works need to express themselves, each in their own way.

Her exhibitions in France, Belgium and Switzerland, either individually or in group exhibitions, such as at the Thuillier Gallery in Paris and recently in La Rochelle, are another part of her public life.

And she also participates in educational workshops, mainly in schools. As it was the case on several occasions with primary school children in Avignon en Arts, in partnership with the Persil school and Les Hivernales CDC de la danse, then in Uzès, for the project "Cocon qui s'en dédit", and again at the French School in Bilbao, in the Artistic Residencies for Dance and Art Workshop Projects (Workshops, Film, Exhibition in 2017, 2018, 2019 and 2020). A most stimulating partnership with the youngest, as could be seen in the followed exhibitions.

Her strong desire to get out of the frame and the love of the fabric pushed Nicole to paint directly on torn materials, especially during the confinement, a creative period for many artists. Pieces of fabric were then used as a support for the painting, which reveals itself in a different way, an incredible collection sometimes reminiscent of Japanese haikus in the circular canvases.

"Nicole's creations bear witness to a certain humanity, her values and her relationship with the world: freedom, tolerance, peace..."

Nicole's art is evolving, finding in fabric a providential support for new painting ideas. Geometry invites itself on the linen, and the touches of acrylic paint recall the valley of the Eure, the Fenestrelle tower, the heat of the sun, the colours of nature. There is the series of Evanescences or Réveil. There are also the Chaos, fragments of painted canvas which are reminiscent of the remains of fabric from Antiquity discovered during archaeological excavations.

The sandstone sculptures, the starting point for future bronzes, can be seen in La Petite Maison Rouge. Supported by the metal supports created especially by the ironworkers and metalworker Girard, in Remoulins, each subject finds its place in the gallery.

"Emotion is essential in my work. Dance, where movement becomes the expression of feelings, of music, poetry in its universality and timelessness... This is the case for the sculpture Sappho, recalling the Greek poetess (VII/VIs BC), where the drapery reveals the naked body that expresses passions and feelings with its point of origin in antiquity".

A perfect union between the work and the support, the base designed by the ironworkers fits the sculptures like a glove. A true success. The luminosity of Eclatante or the curvature of In Out, stonewares of a rare poetry, the airy suppleness of the series of Envols, bronzes numbered from 1 to 8, almost flying off their circular bases or their iron rods, among other creations, are freely expressed.

Many thanks to Nicole Besnainou for her collaboration on this article.